This is not the Fourth of July weekend that we had planned, at all! All week we had been counting down the days to the long weekend at Hanna Park. We had reserved our site in February and were gathering our favorite outdoor camping meal recipes and getting the Ham Radio ready for some time.

It was not to be. Instead, we were to get an education in adventuring with a travel trailer. It should have been a warning that about half way there the new ML350 gave us a warning that the right rear trailer taillight was out. For most of the way there we thought that was our biggest worry.

About on half mile from Hanna Park someone drove up alongside us and yelled out their window something about our rear trailer tire. I looked back in the mirror and I could see smoke from the driver-side rear tire on the trailer. I slowed down because I thought we had a flat tire and limped along a few blocks until I could make a safe turn onto the road to Hanna Park. As soon as I got out of the car, I could see an occasional flame shoot out of the wheel-bearing opening. Not good.

As luck would have it, a mechanic was across the street waiting on members of his party to arrive. He and I took a look at it and it was a smoking mess. The wheel cover was gone, the grease seal was gone, the castle nut was missing, the bearings were gone and the wheel was just hanging on. We were stunned.

After calling Coach-Net for assistance and getting a mechanic on the way, we limped into the gates of Hanna Park so that we could at least have security protection. Shortly the mobile mechanic arrived and was able to cleanup the mess and get the trailer so that it could be moved for a short distance if necessary.

The Mechanic speculated that the axle had never had a cotter pin put through the castle nut that holds the bearing assembly in place. As a result, the castle nut backed off and eventually fell off releasing the bearings and grinding them to pieces. The drum got so hot that it melted a portion of the seal area, making it impossible to reuse.

Totally dejected and still in shock, we had no choice but to abandon the trailer at the gate at 9:00 PM at night, unpack and head home. I let security know what was going on and they indicated that they would watch it overnight for us and to call the office at 8:00 AM the next morning.

At 8:00 AM the next day I contacted Hanna Park Management and let them know what was going on and that I would be working on getting it out of there as soon as possible. I then started working with our extended warranty and travel interruption insurance provider CornerStone United to get the Island Time relocated to the dealer for service. The Mobile Mechanic had suggested that we limp along on three wheels to the dealer about 20 miles away. That would entail going over the Dames Point Bridge and I could just see having the overloaded tire blow out there, so that was not an option.

At this point I have talked with the RV dealer and they are going to secure the trailer in their service area and take a look at it on Monday. They are also helping to build a file to submit to CornerStone for coverage of the parts and service. We will see how that goes.

When it is all said and done, this should have never happened. It was not a lack of care or maintenance on my part, but I now know how and where to watch for problems. I will include an annual personal inspection of the bearings to be sure they are functioning properly and that they are secured properly. We also learned a great deal about how to use roadside assistance and what can be done in the field. As we travel there will be the occasional tire or even car problem and we are better prepared as a result of this. We will never have a bearing problem like this again. I will see to that.

We need a new axle because the spindle is damaged on the old one. I will have them service the other wheels while that have it and go over it with a fine-toothed comb. Everything can be fixed.

When we were done dropping the trailer at the dealer we were already starting to regain our perspective and ended up laughing at parts of it. We are going to continue our cruising on land and ended up laughing at singing road, road, road, your boat… The Island Time will be fine, we will be fine and we will continue the adventure knowing that we are wiser and more experienced and the Lord keeps us safe in the palm of his hand. Amen. 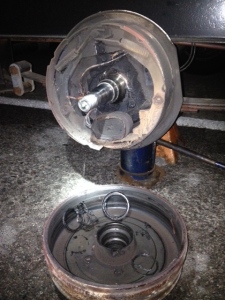 This was all that was left of the wheel bearings 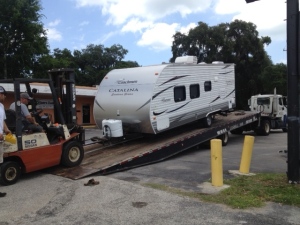 Island Time being loaded on trailer