First Outing of the Season

Our first outing of the year was a weekend/vacation spectacular. After having the Island Time serviced at Camping World of St Augustine earlier last month, it was time to start the season. I would like to say we were ready, but at best we were planned. Things have been so busy and intense at work and at home that the best we could do was make a list and check it twice. But list in hand and trailer loaded we the Island Time and ML350 and away we went.

First stop was Fort Wilderness with Logan and Gavin. A full year later than our last outing with the two of them, in fact it was one year to the day. Once we arrived we quickly unhooked the trailer and Jeannie took the Poodle Boys to the Disney dog kennel for the weekend. While they were gone I started the process of “un-winterizing” the Island Time. Since we had not had a chance to have a shakedown outing, the water system was full of antifreeze and the water heater was still bypassed. After a busy two hours we were ready for a great weekend.

Wes brought Logan and Gavin in the late afternoon and the fun was on! Burgers on the grill, some playground time and it was time to setup the “transformer” beds. A little TV and it was lights out for all of us.

Saturday brought lots of fun activity. Golf cart rides, playground, boat rides, more playground and more golf cart, along with some Sneaky Snacky Squirrel and it was time for dinner and then over to the Campfire. Both of the boys were really into the festivities at the Campfire, even having pictures taken with Chip (or was it Dale) as well as making S’mores.

Before we knew it the day was over with a little more TV and transforming we were all out for the night. The next morning came early as Wes, Loretta, and Tyler came by at 7:00AM to pickup the boys for more fun at Disney the balance of the weekend.

We needed to checkout by 11:00AM and really needed to be on the road by 10:00AM to give us a better arrival time in Naples. We worked on getting this put away and Jeannie picked up the Poodle Boys from the kennel and we were on the road by 10:10AM. Not too bad for the first tear-down of the season.

We were on our way to Naples Florida which we planned as three to four hours of travel. What we had not planned on was 22 to 25 knots of wind on just off the port bow of our rig. I have a reasonable amount of wheel time with our rig and have full confidence in our setup. However, that was the worst drive I have ever had. When we arrived, I was ready to trade for that F150 and airstream right on the spot. It took me two days to get over that experience.

Crystal Lake RV Resort was an impressive facility. It was a gated community with lots of activity and lots of park model RV’s. Over the years it had transformed from an RV facility to owners placing less mobile park model trailers. The community was nice, but had really turned into an upscale retirement community. The location was pleasant and safe, but somewhat unusual as we were one of the few transient rigs. None the less, it was a nice place.

We enjoyed an Aurelio’s pizza and toured the City Docks as well as touring the downtown area. We enjoyed our tours, but there was nothing that really stood out. The scenery was beautiful and the weather was great, so it was an enjoyable visit.

Certainly, one of the highlights for me was sailing and purchasing a Soling One Meter RC model yacht. One of the guys at the lake offered a nice used model for sale and I could not resist. I did get to sail with them on Friday and at least did not embarrass myself, finishing within a respectable distance of the leader. Lots of fun to come with my new boat back in Jacksonville.

Overall, it was a great vacation. Family time was awesome and we can check Naples off of our list. We are looking forward to our next adventure.

Logan and Gavin at the Campfire

Fun on the golf cart

Games on the Island Time 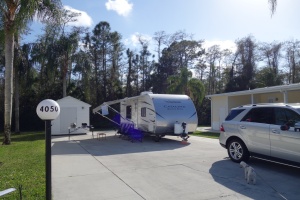